Featured ITPS258: What Do You Mean You Don’t Fly There?

Featured ITPS257: Thank You For Coming To My Presentation 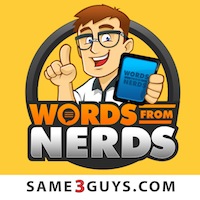 Words from Nerds was our inaugural podcast in 2009. We originally conceived the format as though you were joining a conversation between three tech nerds already in progress. That’s because we often had conversations exactly like what you heard on the show.

Segments from the early days included Nerd History and Nerd News. Our interests were vast and varied, so we often found ourselves talking about the latest NASA news, smartphone gear, blockbuster Hollywood movies, car tech, Disney and just about anything in between.

We retired the show after Tom’s death in 2016. We had just recorded our milestone 300th show.

Fun
We like to have fun. We’re here to entertain. This isn’t work or school.

Informative
We’re passionate about the shows that we do. We’ll do our best to share our knowledge, experience and opinions with you.

Family-Friendly
Our shows are safe for the whole family. No bad words, no risqué topics here.